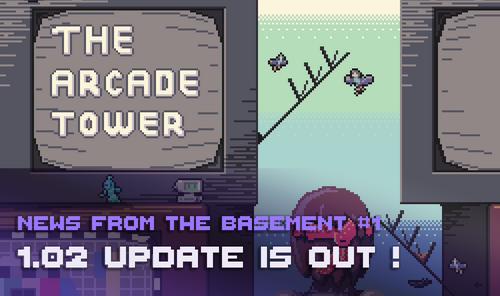 Hi everyone ! We’ve got some news for you: we worked (hard ?) and listened your feedbacks to improve The Arcade Tower :). It includes a lot of improvements for controllers, general gameplay, and a lot of bug fixes to make the game better. We also have a lot of things in the boxes but they’re not finished yet so, we’re not going to tell you about it right away, otherwise it’s a spoiler. And I don’t like spoilers.

Second thing, in case you don’t follow us on twitter (boo that’s bad), we wanted to thank everyone who downloaded The Arcade Tower, you are now more than 2,300, it’s really huge. So just, thank you, you are all amazing <3

Anyway, here’s the full changelog (we didn’t include all the bug fixes, otherwise it would be really long…) Have fun with The Arcade Tower, don’t forget to tell us what you think, what you would like to have/improve in the game, or just to say us something ^^