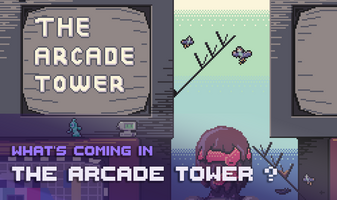 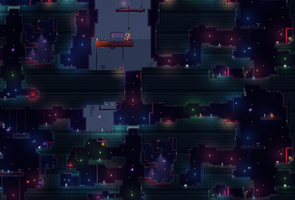 Hello, it’s been a while ! We’ve got some exciting news for The Arcade Tower in the next update, but before, let’s talk about… hugh… you ! You are now more than 3.000 to have downloaded and played The Arcade Tower since its launch in January, and for that, THANK YOU ALL 💜 It’s really amazing that our (little ?) work has so much visibility in such a short time, including more than 7.800 views and 700 collections. Again, t-h-a-n-k-s.

Then, let’s talk about what’s next in The Arcade Tower. And you know what ? There’s a new mode incoming ! We called it “Endless mode”: you’ll play in a procedurally generated world to have the best score possible, in a limited time (see picture). And you might encounted some new characters there, including the Merchant: he’s not funny, but he can be useful, sometimes… In Endless mode, you’ll also encounter all the enemies you can fight in Story mode, and all the items too. Annnnd new items… (I won’t spoil you, I promise). We’re also working on the main character’s design to improve the sprites and animations. And bug fixes, of curse.

Okay, now we already see you saying: “When is it coming out?” Well, we don’t really know, to be honest. At the moment, we have a lot of work to finish our computer degree, so it’s a little complicated to move quickly in the game development. But we think it will be released before the summer. We think.

To finish that devlog, if you have any remark, comment, suggestion, or just want to say us something, feel free to do ! We listen everything ! Oh, and for those who’re not following us on Twitter, it’s a good time to do, we post more regularly new content and advancement on The Arcade Tower. It’s here.