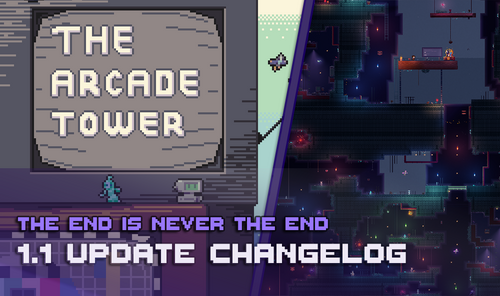 We’ve been working hard in the last few months to make The Arcade Tower better; and also to get our computer degree (which is now done 🥳). We developed a lot of new things to provide you a great experience in the game, including a completely new game mode called “Endless mode”: this mode is a procedurally generated world where you can relax and try to reach the best possible score. Your game ends when you die, but you can restart over and over again ! There’s also a new guy: The Merchant. Maybe you should talk to him, he might have some useful items for you… Also, there’s a new design for the main character, so that it integrates better with the rest of the game. Annnd bug fixes. A lot of bug fixes and performance improvements, according to your feedbacks ^^ You’ll find the full changelog at the end of this devlog 😉

Last but not least, thanks to all the people who have contributed to the game by providing feedback, bug report, or just by downloading and playing The Arcade Tower since the beginning, we’re really happy to have you here ! We’re now near the 10k views, and 3500 downloads, that’s really incredible ! And if you do not already follow us on our Twitter (that’s not good), check this link to have the latest news and announcements before having them here.

To finish, here’s the full changelog with everything included in this big update. Have fun with The Arcade Tower, and please give us any feedback or just tell us what you think, what you would like to have in the game, or just to say us hello !